Home / Handicrafts / How Virasat was Born

How Virasat was Born 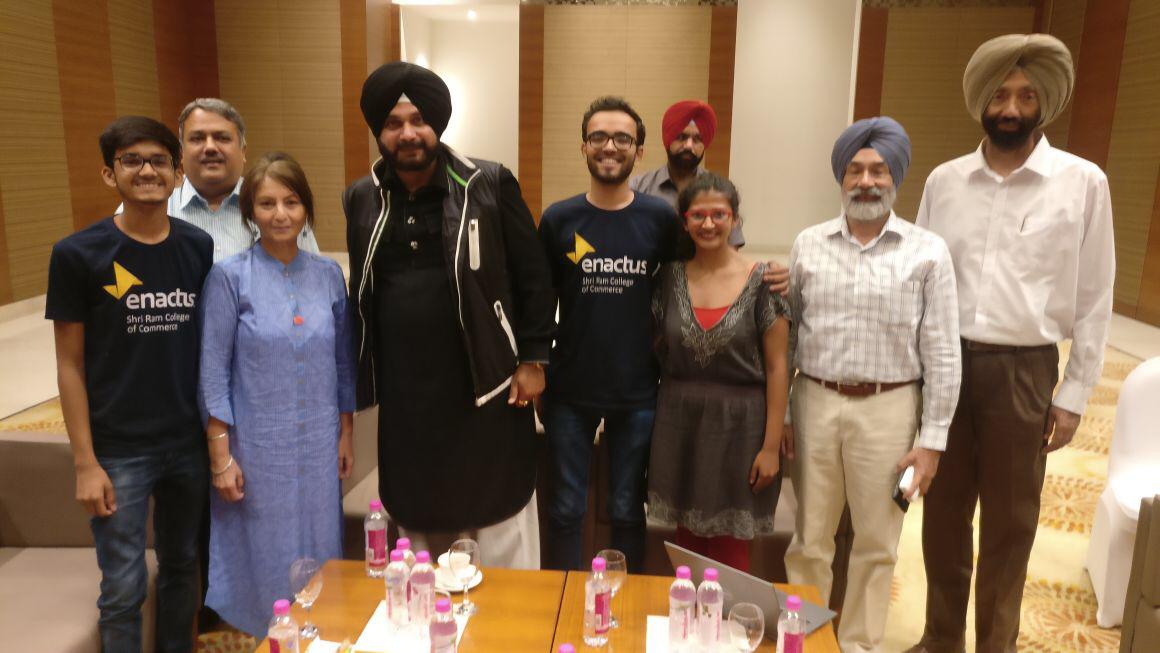 A Cup of Chai, A Newspaper, and A Group of Changemakers: How Virasat was Born

Surreal: That is the emotion one feels when looking back at Virasat years after its inception. To think that something conceived so spontaneously; a project which rarely anyone believed in, led by a group of students armed only with a mind for business and a heart for the world, would grow to uplift entire villages and provide hundreds of people with livelihoods: Nothing would suit these turn of events other than “Surreal”.

The journey of Virasat has been an interesting one, but its impact and inception set it apart from any other craft organization out there. Here’s the story:

One fine morning, Arjun Goel and his comrades from Enactus SRCC came across the Thathiyar craft while browsing through a newspaper, over a good old cup of chai. He still recalls those moments like it happened yesterday: “A newspaper article, that’s where it all began. I remember how we were all taken aback when we read about the fact that an Indian craft, practiced by a group of artisans lying so close to Amritsar was included in UNESCO’s 'List of Intangible Cultural Heritage'. Rather than the fact that there was an Indian craft included in the list, what struck our friends the most was that none of them were aware of the existence of such a village, community, or this supposedly world-famous craft form, even though many lived close to Jandiala Guru, home to Punjab’s Thatheras. It was quite ironic then, that they were made aware of its existence only through some UNESCO officials deciding to include it in their ‘List of Intangible Cultural Heritage'.

Now, any normal group of students would have discussed this for some time, shared their grievances on India’s neglected craft industry and its great heritage, how awesome it was that at least one was getting the recognition it deserved, and went back to studying for the upcoming exams. But these were no ordinary students; These were Enactus SRCC members, so they decided to dig deeper into it. What our protagonists found out blew them away:

The Thatheras of Jandiala Guru are mainly engaged in the traditional technique of manufacturing brass and copper utensils. The metals used are believed to be beneficial for our health. Cutting metal sheets, an age-old part of the Thathiyar craft

The process begins with procuring cooled cakes of metal that are flattened into thin plates and then hammered into curved shapes, which form the basis of the renowned Pitthal made by the Thatheras. Heating the plates while hammering and curving them into different shapes requires careful temperature control, which is achieved by using tiny wood-fired stoves (aided by hand-held bellows) buried in the earth. Utensils are manually finished by polishing with traditional materials such as sand and tamarind juice. Designs are made by skilfully hammering a series of tiny dents into the heated metal.

It is these designs, meticulously rendered through the age-old tradition of hammering that sets the Thathiyar craft out from any others. This famed art of making brass vessels by hammering was once the favorite of the royal families of India, with the gold-tinted “Pithal” vessels an inescapable sight in any noble household of India.

But, as they read further, some disconcerting details also came to light; Mudita di, Founding member of Virasat says, “We were a bit disturbed when we found out that the Thathiyar craft, which employed around 500 artisans during its glory days, was now reduced to a mere 30. Not only that, the remaining Thatheras were struggling to eke out a living and as a result, more and more thatheras were seeking out alternative employment opportunities to sustain their families; The Thathiyar craft form of Jandiala Guru was on it’s way to oblivion.” 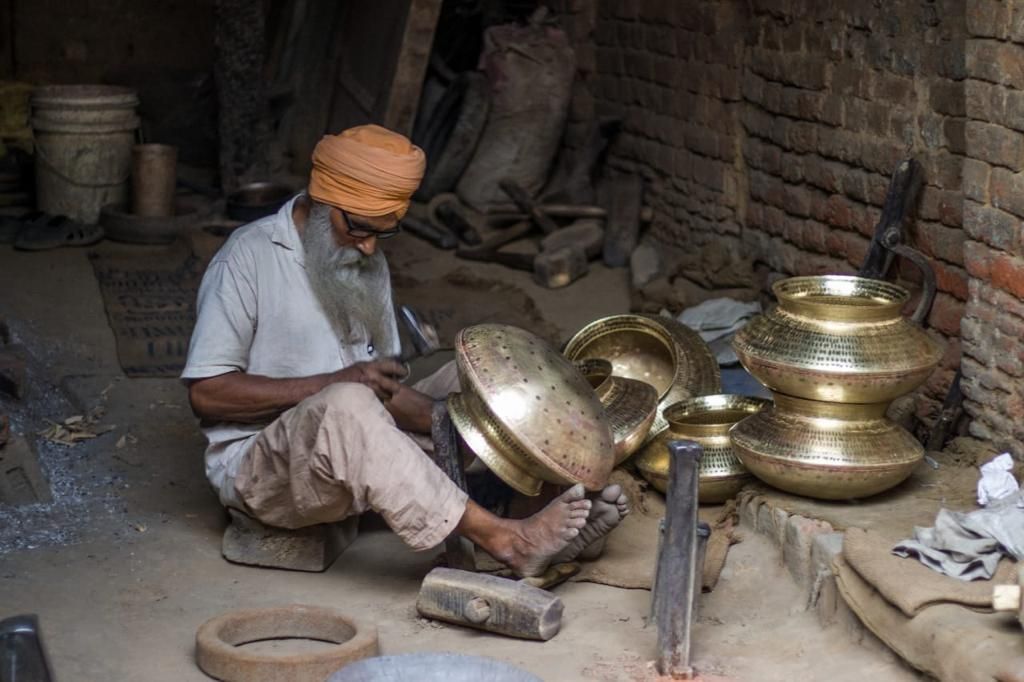 A Thathera applying the finishing touches to his gold-tinted vessels

“When we read about the supposedly pathetic situation of the Thatheras, we immediately made up our minds to visit Jandiala Guru and assess the situation there”, says Arjun, another team member who oversaw the inception of Virasat.

So, after some discussion with their batchmates and seniors, the team was off to Jandiala Guru; to see if what they had heard and read about the Thathiyar craft form was true, and to see if anything can be done about it.

Jandiala Guru has been home to the best of thatheras for a long time. Recognition for the unique and painstaking craftsmanship finally came with the craft finding its way into UNESCO’s prestigious list of intangible cultural heritage. But, beyond some articles and publicity, the short-term recognition did precious little to improve the condition of the artisans themselves. The Thathiyar Gali of Jandiala Guru

This was clearly evident to the team when they interacted with the inhabitants of Jandiala Guru: The artisans toiled all day, spending more than 12 hours in the blistering heat of the congested workshops, hammering out brass and copper sheets to make the vessels that have given them and their ancestors everything.

Neeraj Bhaiyya, son of master craftsman Manohar Lal Khattar recollects: “Metalworking is not just a form of livelihood for us; it defines our family and kinship, work ethic and status within our society. The Thathiyar Kala is bequeathed from father to son; The moment when my father saw me worthy enough to take me to his workshop and show me the first steps of this craft is one of the most unforgettable instances of my life. But more than anything, it is a way for us to pay homage to our forefathers, to carry on this great legacy, this Virasat that was entrusted to us, by them and by the almighty.”

Even though the Thatheras worked so hard for their living and held so much pride in their craft, the weight of their legacy was getting too heavy for them to carry. The thatheras had problems galore staring them in the face: They were not able to procure raw material, there was no demand for their products and people were unaware of their great legacy. The decay of the thathiyar craft was evident from the steep decline in the number of thatheras, and even the rest were struggling to make ends meet, only holding on to the craft due to the honour they place in it. The team with the artisans of Jandiala Guru Jandiala Guru in its rawest form

On that visit to Jandiala Guru, the team realized something; that they were dealing with something completely new and different here. This could either turn out to be a huge opportunity or a monumental disappointment. If we went forward, Enactus SRCC would be wading through uncharted territory.

But, as Arjun and his paisans watched the thatheras meticulously hammer out the metal sheets, with so much concentration and care at the same time, they made up their minds; They were going to start something to revive India’s artforms, Virasat, and the Thatheras would be their first artisan community.The rest, as they say, is history.