Uston Ka Mohalla Part 1: A Peek into the Golden Craft of Usta, Bikaner While meandering through the narrow lanes of the serene Uston ka Mohalla, I felt a bit disconcerted. It had only been a week since my appointment, and I had already received instructions to visit Mr. Mohsin Raza Usta in Bikaner as my first assignment with Virasat.

A mixture of dread and excitement washed all over me as I knocked at the house that was supposed to be his. But, I was taken aback when I was greeted by a homely female face at the door. I found myself very confused at this sight as Mohsin Ji was supposedly a bachelor, but the woman was thankfully revealed to be his brother's wife. She promptly welcomed me in, and in a typical display of Rajasthani hospitality, I was served an array of homemade refreshments [This was before the onset of the COVID-19 pandemic when humans were accorded the simple pleasure of visiting other homes and enjoying their cuisine]. She also informed me that her husband and Mohsin Ji [I call him Mohsin Bhaiyya now] had gone to the mosque for his Maghrib prayers. They would be back shortly.

As I sat there, feeling guilty about not having been to a temple in months and nothing else to occupy me in the meantime, I was properly able to run my eyes through his abode. I started walking around, and keenly observing the home and workshop of this mysterious artisan. A surrealistic aura surrounded me, with his instruments and the best pieces of his golden artwork giving a rustic feeling all around. I felt like I was being transported back in time, to those days when the Usta Artisans of Bikaner traveled around Bharathvarsh, offering their services to the greatest of kings, the noblest of leaders, and the richest of traders.

But, I felt shaken back to reality by the woeful conditions of Mohsin Ji’s workshop. Faced with the cruel reality of the modern world, I found myself struggling to comprehend the fact that artisans with such skill, pride, and legacy were struggling to even get by decently in their lives.

The artisan in question, Mr. Mohsin Raza Usta, is a trained and skilled practitioner of Usta Kala: the golden craft of embossing done by the Ustads of Bikaner. He has been a practitioner of the art for more than 15 years. 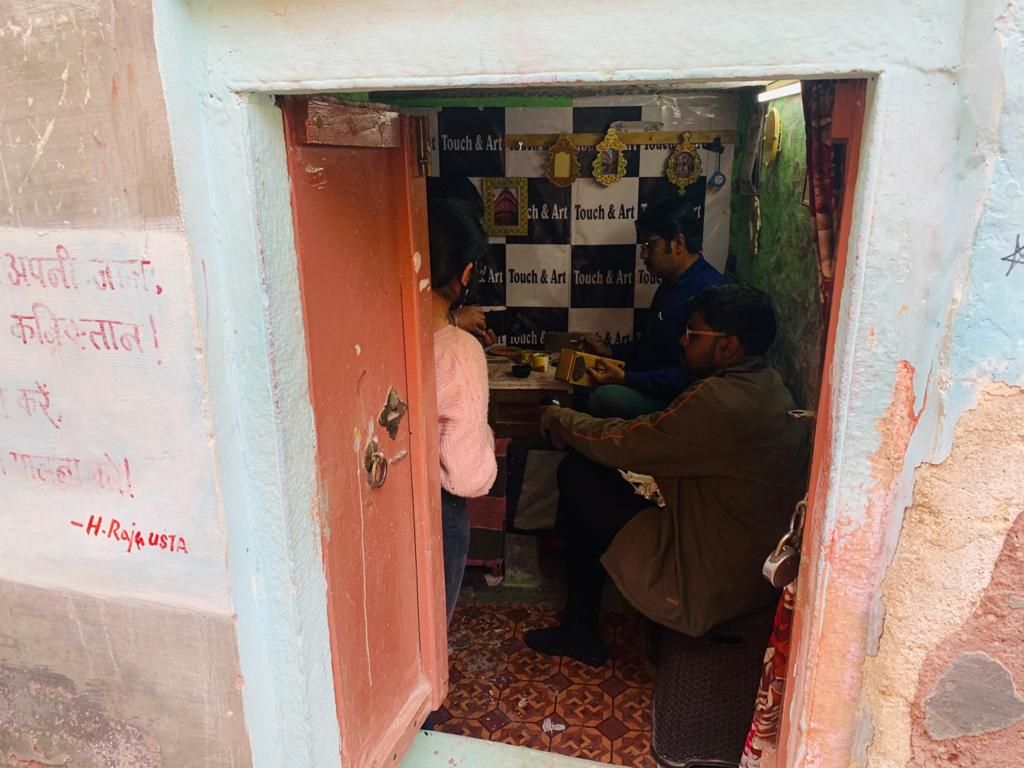 Originally of Persian origins, Usta was brought to India by the Mughals. A favorite in Royal Circles, the Ustads plied their trade in the Darbars and Havelis of Mughal Dilli until a certain visitor from Bikaner came calling: His Highness Raja Rai Singh.

At the time, Rai Singh was a commander in the army of Akbar, eventually going on to serve under his son Jahangir. It is said that Rai Singh was so captivated by the beauty of Usta that he requested Emperor Akbar to allow some of the craftsmen to be dispatched to Bikaner. Akbar, who was extremely fond of Rai Singh, granted his request and sent seven Usta artisans to work in the Court of Bikaner as a gift to his beloved commander. Raja Rai Singh, exalted at acquiring the services of the artisans he so loved, promptly employed them in the construction of his dream abode, the Junagarh Fort. Even after his death, Usta remained a favorite of the royals of Bikaner.

Our inimitable Ustads took to Bikaner like a duck takes to water. The master craftsmen left their imprint on every type of construction there. Usta art was so renowned that the artisans were often contracted to work in faraway lands, designing magnificent buildings like the Bhandasar Jain Temple, the Mazhars of Amir Khusro, Nizamuddin Auliya, the Dargah Ajmer and many more. But, time is the only constant, and it changes everyone and everything; The Ustads of Usta were no different. It was during the British rule that Usta art started migrating from the walls and roofs of the Havelis to anything ranging from picture frames to snuff boxes. The intrinsic floral designs and the mesmerizing gold inlays swooned the aristocracy of India, and along with it the creativity and skills of Usta artisans also bloomed.

But then, the hard times hit. With decreasing demand and loss of royal patronage, the artisans started struggling. They could no longer find buyers for their exquisite handcrafted golden articles. Mohsin Ji and his brother working on their masterpieces

Despite the dwindling revenue and recognition of their products,  the artisans displayed remarkable fortitude in hanging onto their legacy and craftsmanship. Time and time again, the foremost of their craftsmen were presented with national and state awards and honors, but that was the limit of government assistance which they received. No active intervention was done from the part of the government to prop up this dying artform. In fact, national awardee Mohammed Haneef Usta claims that the government once shut down a studio they established to attract tourists, accelerating the decay of the craft. The worst part is that the decay has worsened with time. Last decade there were around a 100 Usta craftsmen; Today there are 10. The artisans are leaving the craft and shifting to other menial occupations because of a lack of demand, as people are unaware of the craft. This dearth of awareness means the general public does not understand the worth of Usta, and they are unwilling to pay the high price demanded by the pieces. I was filled with a profound sadness as I mulled over the state of the Usta artisans today: The Ustads who designed Grand Palaces and Havelis, reduced to living in congested houses on the narrow Uston ka Mohalla; The artisans who were showered with silver and gold by grateful Kings now forced to sell their products at a loss to meet their monthly expenses; The artisans who should be revered and honored for preserving our legacy, ignored and left to suffer. I slowly realized the importance of the intervention of Project Virasat, and how it would help to transform their lives like we did to the Thatheras of Punjab. Just as these thoughts were swirling around in my mind, they were rudely interrupted by the sound of a creaking door; Mohsin Raza Usta had arrived.